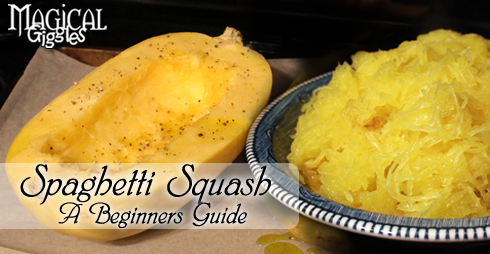 Have you ever heard of Spaghetti Squash?

During the Halloween season, the name alone may conjure up images of a mad scientist splicing together the DNA of a pumpkin and a plate of pasta, but the reality is a lot less spooky.

So, where do you land on the spectrum of Spaghetti Squash knowledge?  It’s likely you fall into one of three groups; 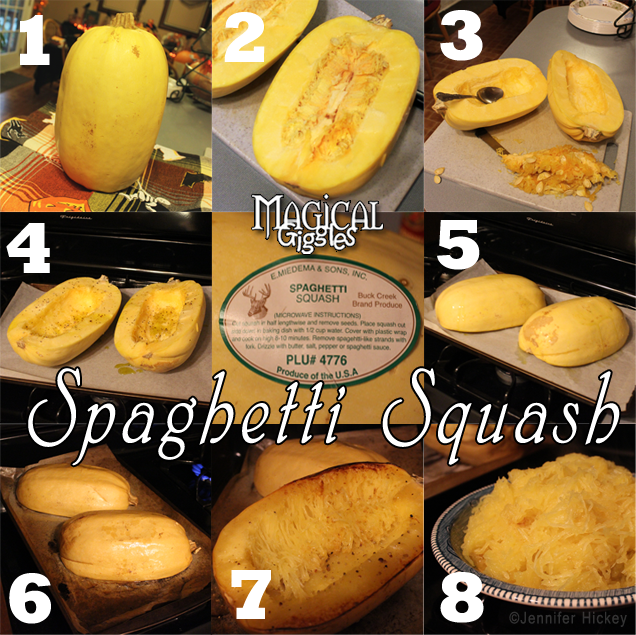 Group A – You do not know what Spaghetti Squash is and I could easily convince you that it involves a plate of spaghetti and a blunt object, or that it might be some sort of strange fetish that involves sitting on pasta.

Group B – Not only have you heard of Spaghetti Squash but you have made it yourself. Perhaps you consider yourself a bit of a Spaghetti Squash expert and under your clothes you wear a leotard with a giant S on the chest, denoting that you are a superhero of squash.

Group C – Something between the extremes of group A and Group B – in other words, a normal person.

My goal in this article is to either introduce you to this venerable veggie and be right here with you at the moment that you say to yourself “OH MY GOURD!! spaghetti really is coming out of this squash!” Or to distract and disorient you before you come to the conclusion that I might be a Spaghetti Squash Stupidhead — which I totally am.

If you are like me, you probably have seen Spaghetti Squash at the local market and thought that they were just slightly anemic pumpkins that stayed indoors reading while the other pumpkins were out in the sun running around the pumpkin patch.

Compared to a plump orange pumpkin, Spaghetti Squash are pale and thin, but they are not just nerdy undernourished pumpkins. They are packed full of nutrients, vitamins, antioxidants, fiber and all sorts of other healthy stuff that makes health food bloggers and nutrition experts quiver with delight.

Also, if you are shaped like a pumpkin, and looking to slim down, Spaghetti Squash is a great way to painlessly cut calories. It has about 40 calories per serving, compared to pasta at about 200  (in other words, about 160 calories saved at dinner to spend later on cookies). So you can have a huge guilt free plate of spaghetti without any fears that someone will carve a face into you when you wear orange clothing.

Most importantly, it tastes good and is easy to make. What more could you ask for? (Cookies. You could ask for cookies).

So let’s get started! 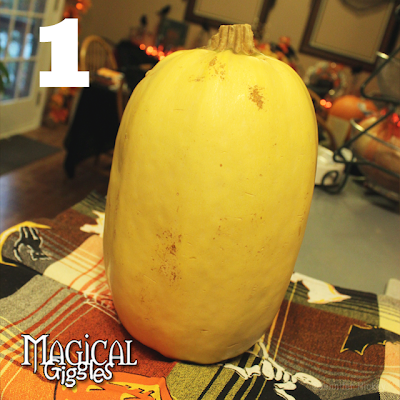 Step 1:  Don’t be afraid — go buy a Spaghetti Squash. Gather up your courage and walk boldly to the spaghetti squash display at your local market. When choosing a squash, pick a nice firm one that feels heavy for its size and is free of blemishes and soft spots. While choosing, pick up several to feel and compare them. Thump them lightly also, because it will make you look like you know what you are doing. 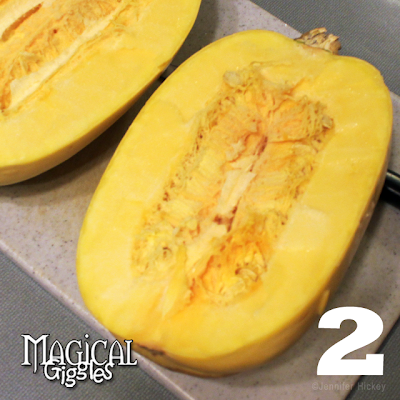 Step 2: Cut the squash in half from top to bottom. Easy-peasy — should be just like carving a pumpkin on Halloween, right?  Not exactly.
As you can see in the picture, the shell is thicker and more dense than a pumpkin. My knife got stuck a few times, and once I had cut all the way around the entire circumference of the squash, the two halves did not gracefully fall open into two perfectly cut halves.
What worked best for me was working my way around the edge slowly, patiently and carefully  — then reaching the end of my patience and prying the halves apart like a she-beast while making overly dramatic grunting sounds reserved for use only when splitting a Spaghetti Squash, opening a jar with a tight lid, and when crowning without an epidural. 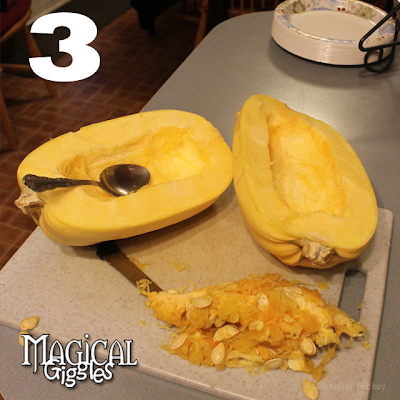 Step 3: Scoop out the seeds and stuff – just like when making a Halloween Jack-O-Lantern! This is fun! We can go trick-or-treating later right?
#IGotARock 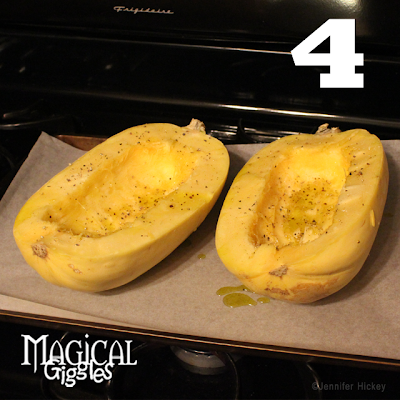 Step 4: Tis the season for seasoning. You can drizzle a little bit of EVOO (EVOO= Extra Virgin Olive Oil — It is important that you don’t use the kind-of-still-a-virgin olive oil, or Olive Oil that is dating Popeye or other sailors). Sprinkle salt and pepper or any spices you like. I am pretty sure these steps are optional though if you prefer not to sacrifice any virgins when you cook. 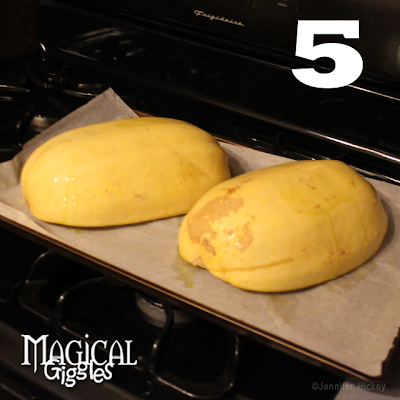 Step 5: Flip them over (open side down) to cook on a baking sheet.
We used parchment paper, but only because Martha Stewart peer pressured us into doing it. It probably isn’t necessary but we had some in the house and using it made us feel very fancy. 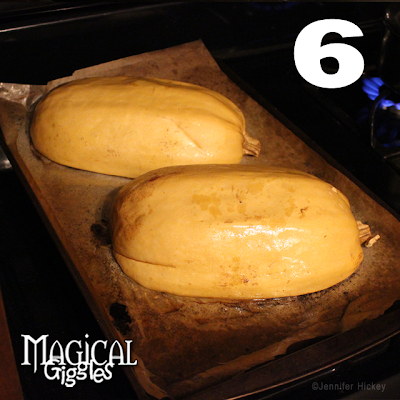 Step 6: Cook for about an hour at 425 F degrees, or until you can’t bear the building anticipation any longer. 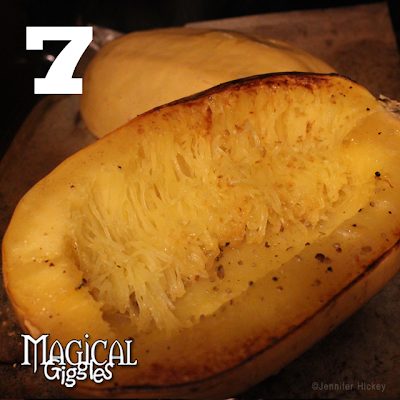 Step 7: Remove the Spaghetti Squash from the oven, flip it over and freak out when you don’t see any spaghetti. When you calm down, grab a fork and lightly drag it over the surface of the inside of the shell and see the spaghetti strands forming. Squeal with delight and call friends and family members over to watch as you dazzle them with your new found Spaghetti Squash skills. 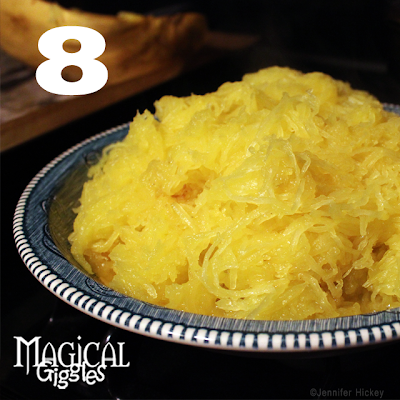 Step 8: Scoop out the spaghetti and serve! We paired it with our favorite tomato sauce and some Parmesan cheese — just like regular pasta.
That’s it! You’re done! There are lots of tasty and adventurous recipes out there to try (which I will share here when I try them), but for a first try this very basic approach is quick, easy and will give you your first taste of Spaghetti Squash Success.
I hope that this article has helped to squash any fears you may have had about trying Spaghetti Squash!
Don’t forget to take lots of pictures and post them on your blog and all over social media so you can show the world you are trying new things, living life to its fullest, creating spaghetti squash celebrations just for the heck of it and that you are NOT a Spaghetti Squash Stupidhead!