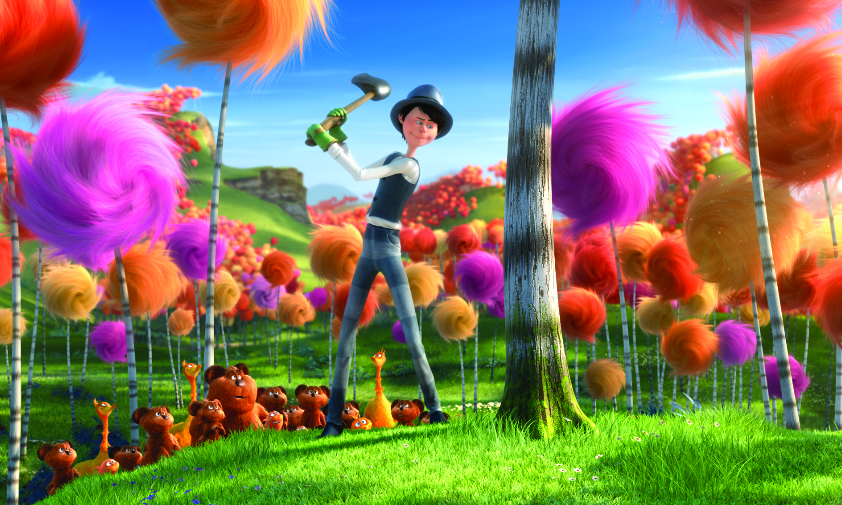 Do you imagine that Pomegranate juice comes from a magical wonderland where the fluffy Pom Pom trees grow? – a place where Kale and Quinoa prance through fields of whole grains while Acai berries and Avocados frolic and giggle under the shade of dark green leafy vegetables? 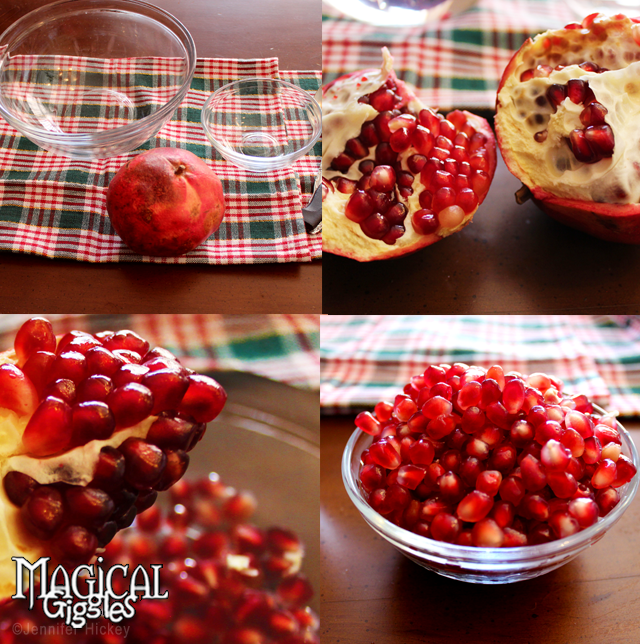 No? Me Neither. That would be crazy.

I am one of those people who, until recently, had never popped open a fresh pomegranate.

When I finally gave it a try, I was amazed at how beautiful they are inside! They are chock full of sparkling rubies! –  juicy, tasty, edible rubies!

Though I am no pomegranate expert, I took some pictures of my pomegranate adventure to share with everyone who may be interested.

There are lots of different ways to open a pomegranate, but I really like the method that uses a bowl of water.

Step by step guide below! 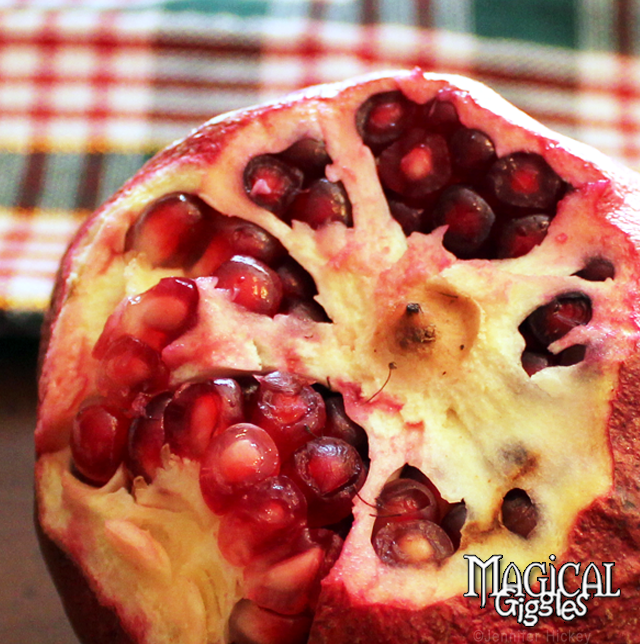 Step 2. Carefully cut off the top of the Pomegranate. I suggest a very shallow cut, because if you cut deeper than the skin of the fruit you’ll be popping open all the juicy little rubies inside (the seeds are actually called Arils, but I can’t stop calling them rubies).

With the top off you can see how thick the skin is and adjust your cutting depth as you score the circumference of the Pomegranate so you can pry it open. 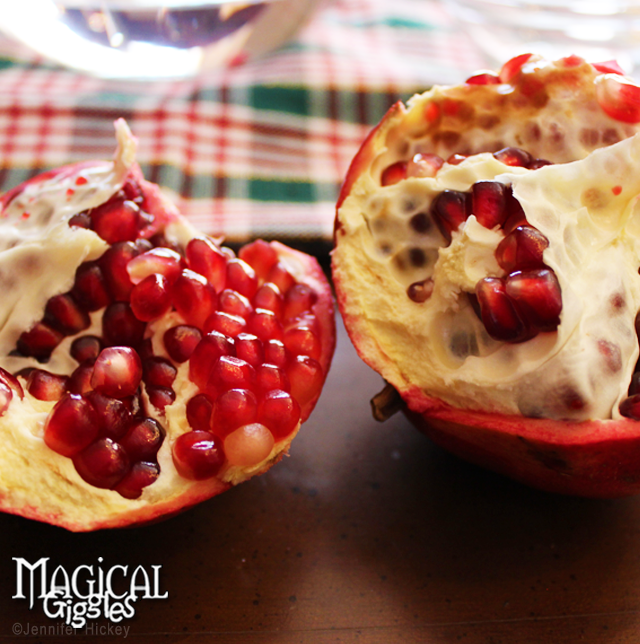 Step 3.  Pull it open into two halves, and feast your eyes on a ruby haul that even the Seven Dwarves would envy. 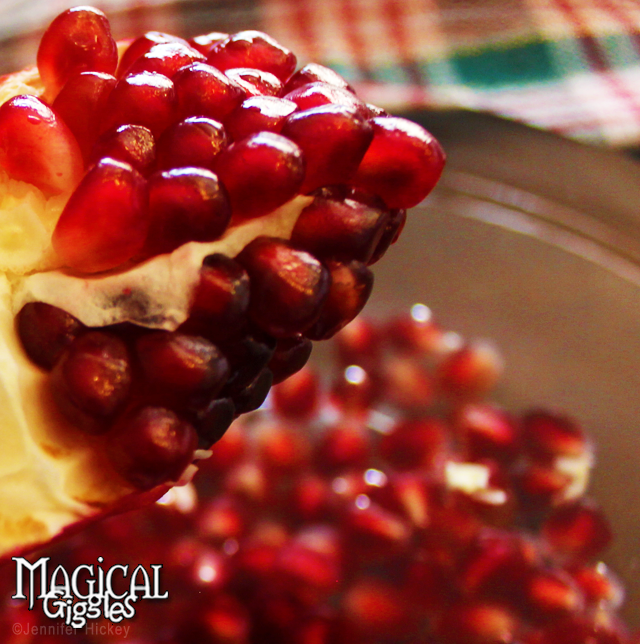 Step 4. Gently massage the little rubies loose from the membrane while holding the pomegranate over the bowl of water.

As the rubies pull away from the inner membrane, let them drop into the water. Be gentle so you don’t break the jewels – the delicious ruby red juice will escape! 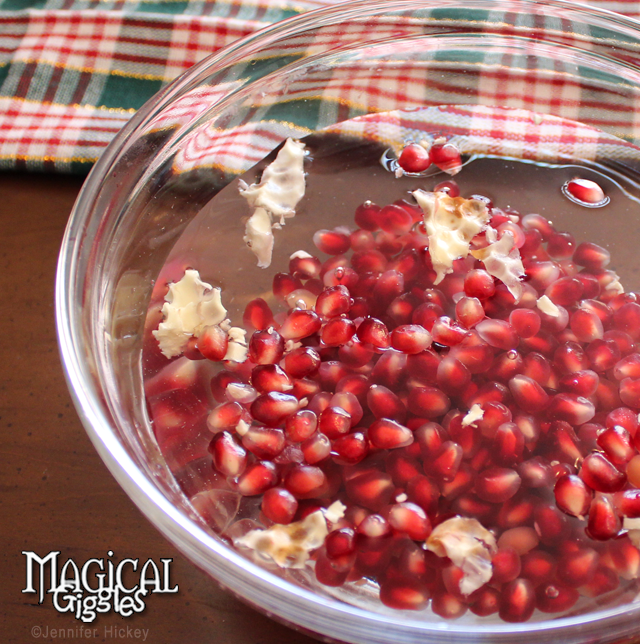 Step 5. The rubies will sink to the bottom and the membrane will float to the top. Scoop the pieces of membrane off the top of the water and discard.

Step 6. Drain off the water and strain the rubies out, or scoop them out with your hands if you don’t have a strainer. 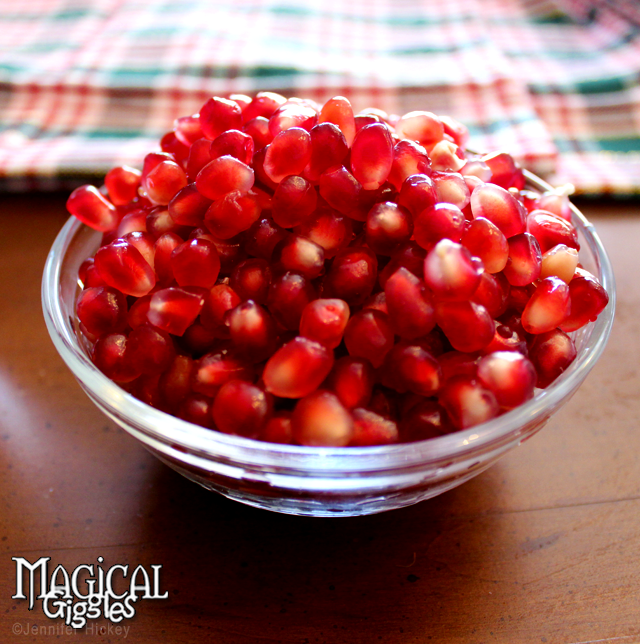 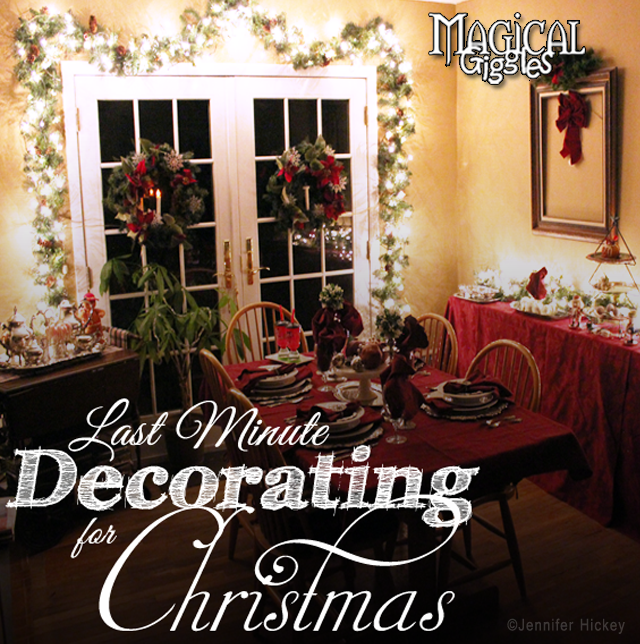 I promised frequent updates on the hardwood flooring restoration project, but unfortunately there have been no updates to report.

Due to some big-time stressful life events, we decided it would be best for all of us to put this project on hold and avoid adding to our stress.

We had planned on finishing this project before Thanksgiving, and it is now rapidly approaching Christmas.

Anyone who knows me knows, I LOVE decorating for Christmas.

I look forward to it all year – I am always trying to extend the season by starting earlier and leaving the decorations up a little longer than most people do. As you can imagine, waiting and waiting until mid-December with no end to the waiting in sight has been torture.

We felt like we were skipping Christmas by living in an un-decorated work-zone.

So, we moved the furniture back into place and put up the Christmas decorations in a hurry. (♪♫ because we need a little Christmas, right this very minute…♫♪)

We’re referring to the current state of the unfinished floor as ‘charmingly rustic’ – in other words scratched, rough, and discolored wood with a few remnants of 50 year old varnish around the edges.

In certain light (at night) the unfinished hardwood in the dining room doesn’t look all that different from the finished wood in the living room, and the transition is not too terribly noticeable – and it doesn’t take any imagination to envision how it will look when it is done.

In daylight it is a whole different story – but still a huge improvement over the tired old plastic-covered-picture-of-bricks linoleum that wasn’t fooling anyone.

A Christmas decorating home tour will be coming soon (hopefully), with pictures that artfully avoid daylight and/or showing the unsightly areas that are still unfinished.

Until then, here is a taste! Enjoy! 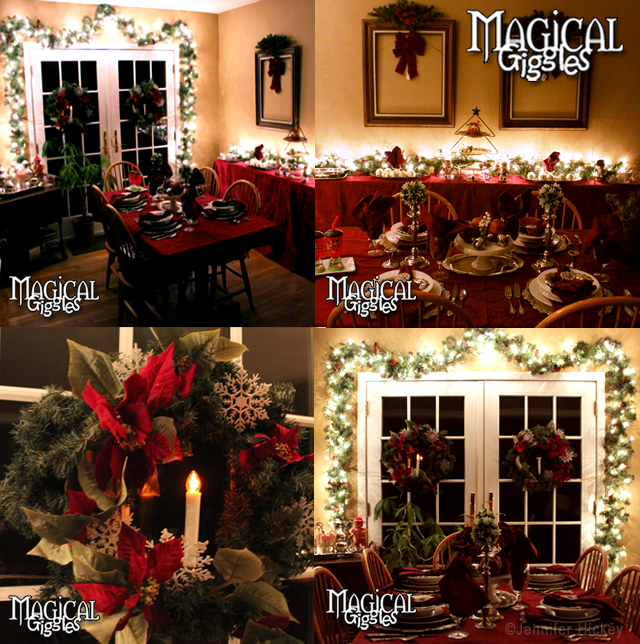 How to remove staples from Hardwood Floors! 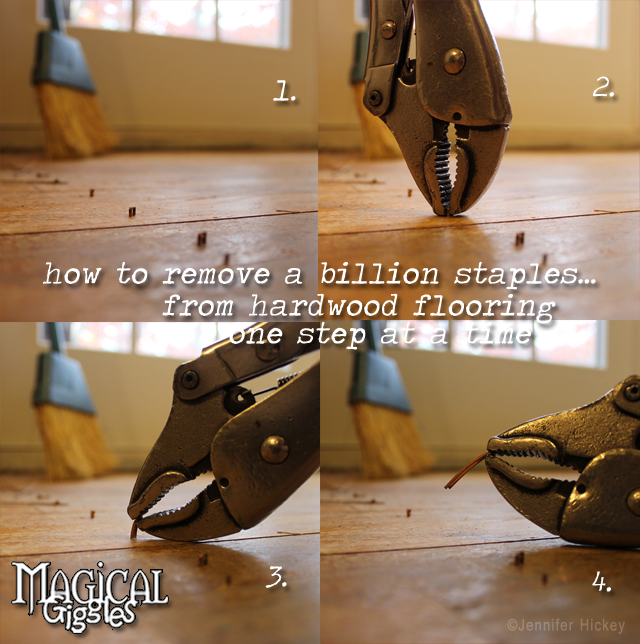 I’ve done lots of home improvement projects, but only on a beginner level, so I still have a TON of things to learn and re-learn with each new project.
With this flooring project I knew how to remove the plywood sub-floor and linoleum, but I did not consciously anticipate the sub-floor leaving behind what felt like billions of staples that did not come up with the plywood.
My first instinct was to pull the staples with the tools I had with me, which were just screwdrivers and a pair of regular non-locking pliers. 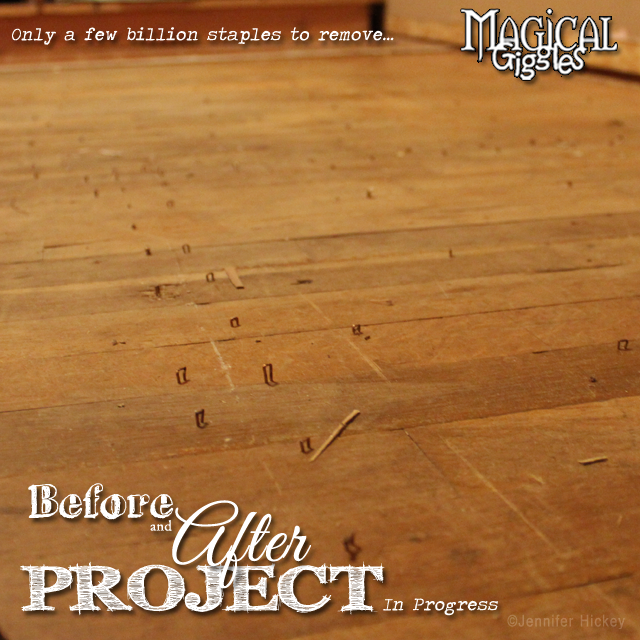 Both tools were painfully inadequate and the very first wave of regret and panic washed over me as I looked out at what seemed to be an army of tiny little staples marching in formation as far as the eye could see — threatening to destroy all home improvement dreams.

I thought I was being logical when I figured that I could yank each staple out at the angle they were put in – straight up and out – using brute force.

I dont know why I thought this. That certainly isnt how I would try to pull a nail!

It just goes to show you that fear (that I was in over my head with this project) can make you forget things you already know, and make illogical thoughts seem right!
Then we remembered that locking pliers exist, and are a far better fit than the non-locking ones I tried, that left my hand aching and exhausted after only a few staples.
So, to pass on the knowledge, and to remind myself for any future projects, here is how I did it. 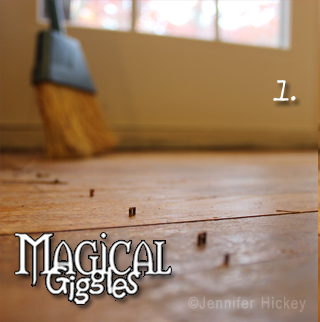 Step 1: Look at all the staples and freak out as you realize that you are about to spend a huge portion of your life on the floor, crushing the flesh between your knee bones and the floor (or you can do as I did and do the majority of the work sort of lying on the ground like a sea lion).
I’d say this staple pulling extravaganza was a combined total of about 4 hours of lying on the ground with non-stop staple pulling fun, and by the end of it I was feeling a distinct urge to clap my flippers and beg someone to toss me a fish.

Or you could wear knee pads. 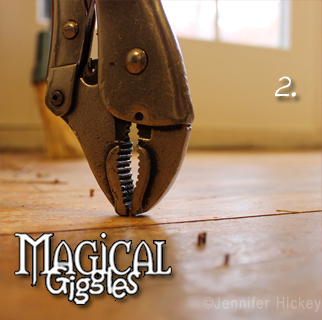 Step 2: Find those locking pliers and lock them down on a staple. You will probably have to adjust them so that they grip tightly enough to pull the staple, but not so tightly that locking and unlocking the pliers is painfully difficult. 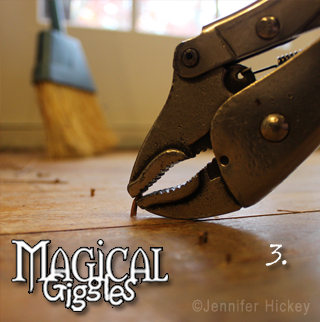 Step 3: Once locked on, just tip the pliers to the side and follow the curve of the tool, slowly rolling the tool on the floor and letting it do all the work of prying the staple out.
The staple will start to pull up and will bend a bit as it comes up. Take it slow, because some staples are in there better than others, and some pull out easier than others.
I can’t tell you how many times a staple came out slowly with a lot of resistance and then suddenly no resistance causing me to crush my poor thumb against the ground with the tool. OUCH! 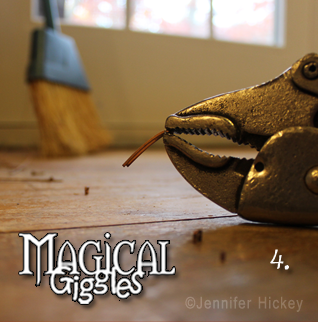 Step 4: The staple comes out and you realize it was pretty easy and you only have to do it a billion more times!
Now, maybe I get a bit loopy when I do a tedious and monotonous task, but take a look at those pictures and tell me you don’t see a face on the locking pliers!
It looks like a prehistoric staple eating creature! I love him and want to keep him as a pet and name him!

I wish I could report that I gave the staple eating creature a creative name befitting his prehistoric and slightly amphibian countenance, but I didn’t. I named him “Facey” — because he has a face, and I am a doofus.

This is really all the proof I need to know for certain that I spent too many hours in solitude on that floor with the staples, and that it may have caused my brain to transform into a bowl of oatmeal.

Okay, that is the end of my big ‘how to pull a staple out of wood” tutorial.

Though I suppose all of this article could have been summarized by saying;

…but that wouldnt be nearly as much fun as describing myself as a sea lion, a doofus, an oatmeal brain and someone who names her tools and thinks that they are prehistoric amphibians that eat staples.
Share this... 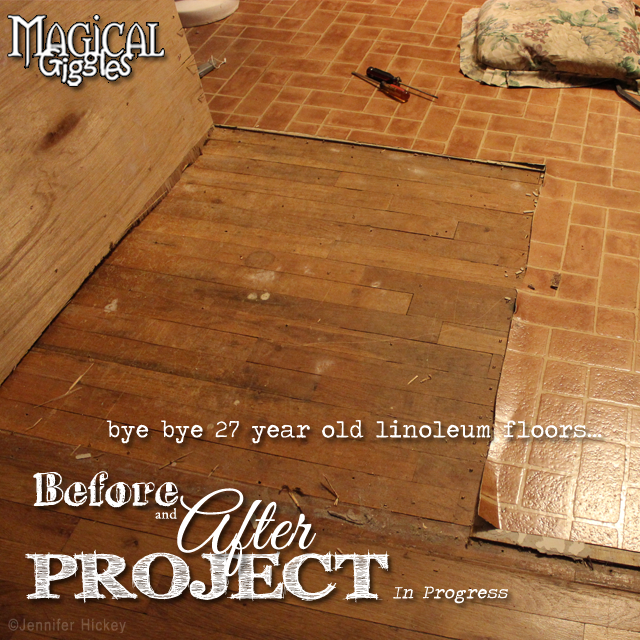 After 27 years, I think it is safe to say that we got our money’s worth out of our 80’s linoleum floor. I have been mentally removing it for at least a decade now and cropping it out of pictures ever since I started this blog.
I finally tackled this DIY (Do It Yourself) project armed with only 2 screw drivers, a pry bar, a box cutter/razor and locking pliers.
Should be easy, right?  Just pop up the old sub-floor and reveal the gorgeous hard wood below.
As you can see in the first picture at the top, removing that first board was exciting and wildly satisfying, because it meant there would be no turning back! You can’t just cut a 4×4 square out of the dining room floor and change your mind! 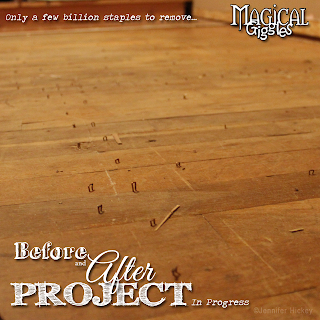 So, on with the adventure! Board by board I pried them all up, revealing…well…52 year old hard wood floors with potential…and …..a BILLION staples to remove.
Hours upon hours on the ground with the trusty locking pliers and a bruised opposable thumb that is quite opposed to this abuse, but we are finally pulling into the home stretch of the first step of removing the old floor.
As I write this first post in the series there is only one small board (and the million or so staples holding it in place) left to remove. Not bad for only 2 days of work!
I’ll be posting new pictures and updates as I go, so check back often. I’ll link to the follow-up posts here.
Total spent on this project so far: $0.00
Here is what it looks like now..in progress! 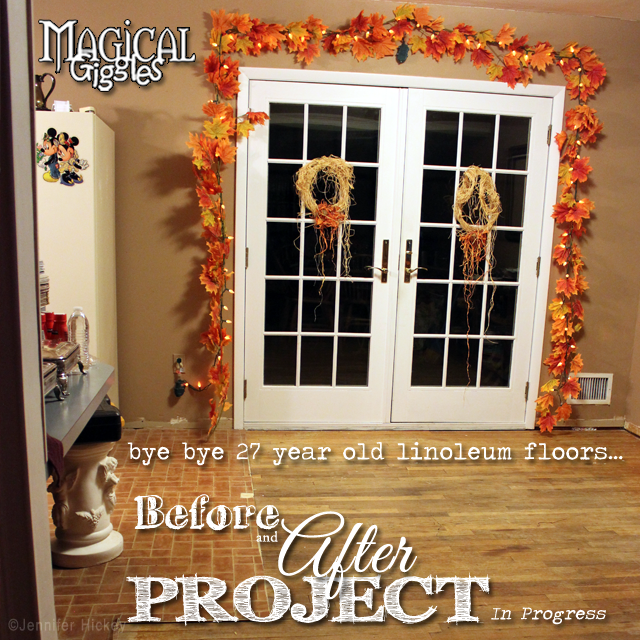