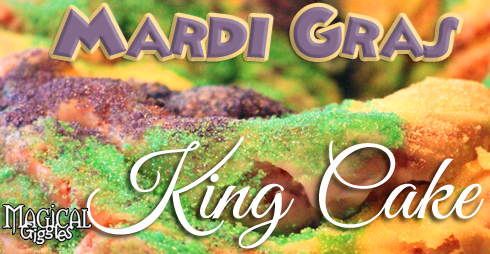 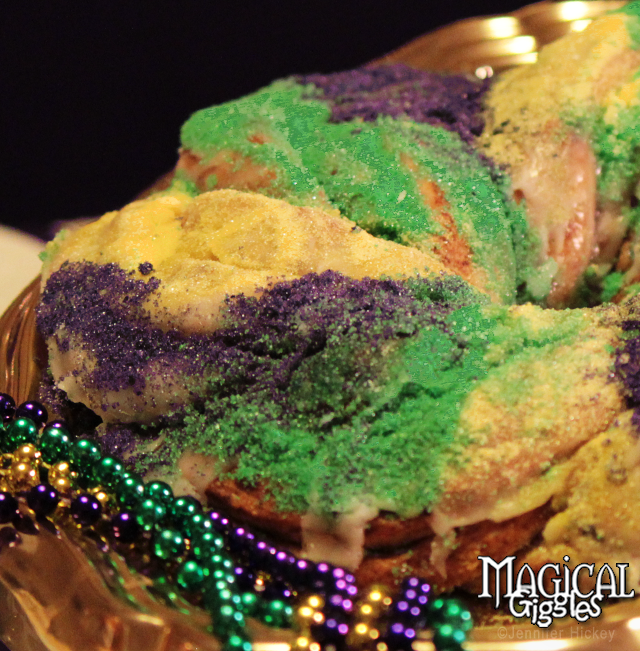 I have to admit, I have never tasted King Cake. I don’t know what makes a King Cake good or bad.

I do know that I wanted a festive treat for Mardi Gras and King Cake is one of the most festive looking Mardi Gras treats around.

Please look away now if you are from New Orleans, or have tasted the real King Cake, because I have made a quickie version of a King Cake-like treat that probably pales in comparison to the real thing. 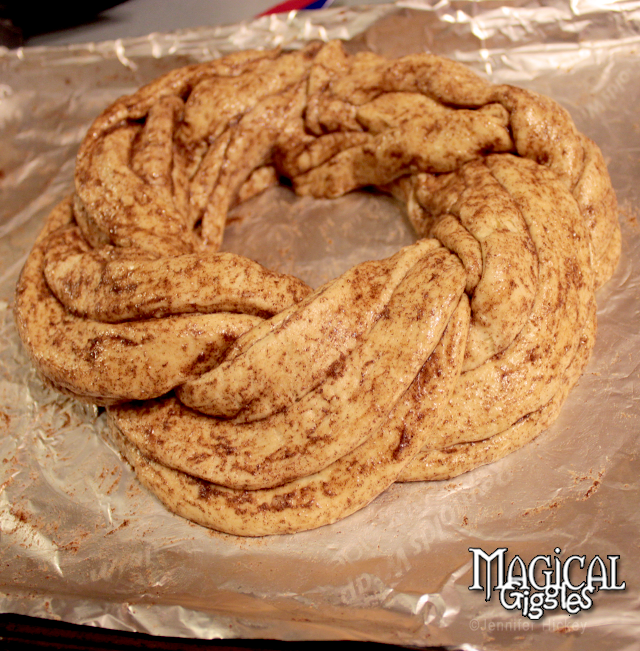 It was a lot of messy fun to make, and I would have taken more pictures of the process, but my hands were covered in sticky cinnamon filling and I didn’t want to have a cinnamon flavored camera — because I would have to eat that too.

So, this is the only in-progress picture, but I think its says it all. 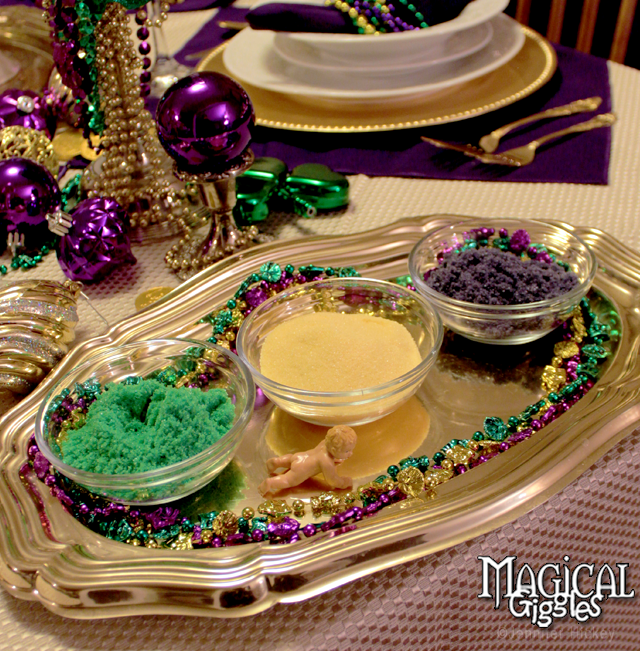 I mentioned in a past post, that I have made my own colored sugar for the first time this year. It was easy and fun!

In case you missed it, here are the full and excessively lengthy instructions; 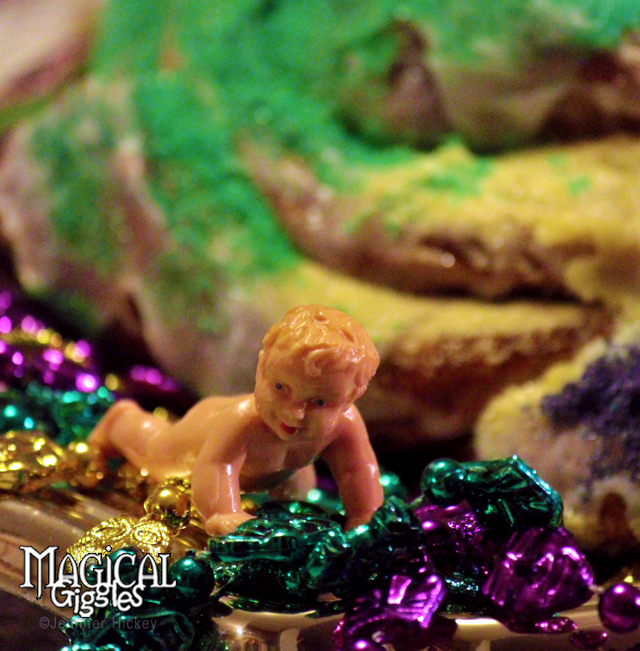 The tradition is to hide a baby charm in the King Cake. The lucky person to get the piece with the baby in it will be blessed with good luck and prosperity.

Choking hazards aside, I’m wishing you all find the piece with the baby!

Good luck and prosperity to you! 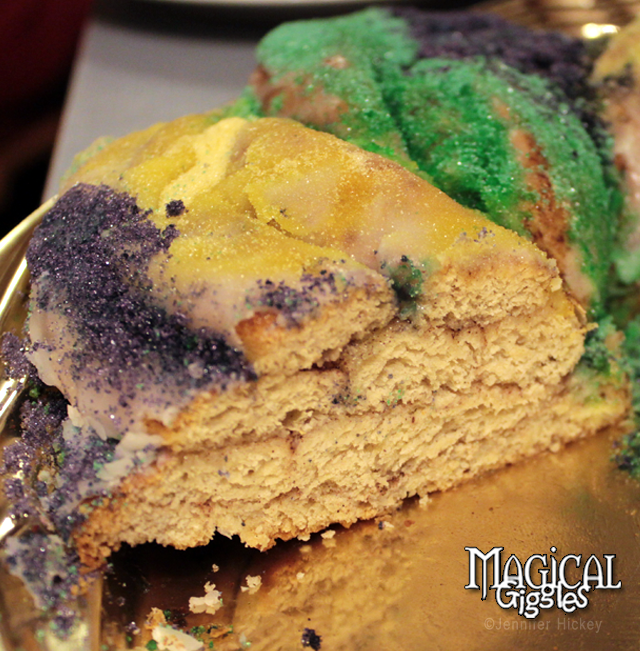 UPDATE: We just served it!

Here it is cut open!

I have not tasted the King Cake yet because I am still happily stuffed from eating THESE divine Monte Cristo sandwiches that Peggo made, but so far two of us have tried it and there are two thumbs up so far!

Not bad for a quickie substitute idea! 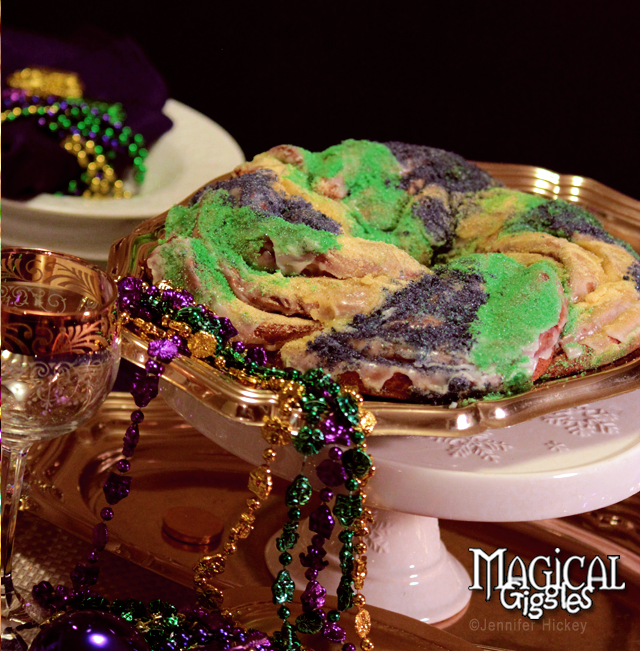 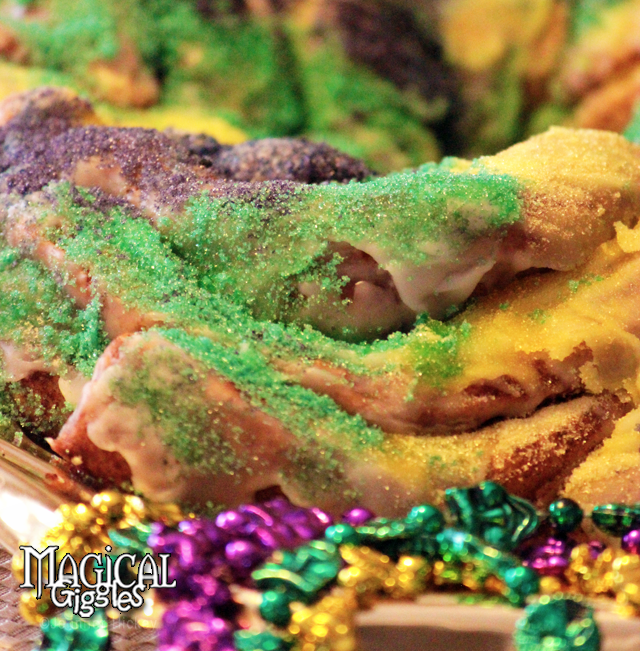 Nitty Gritty Notes – We used two cans of Jumbo Cinnamon Roll dough from Aldi (2@$2.39) — the kind that explodes when you unwrap the cardboard can. Each can contains 5 rolls. We unrolled all the rolls into strips, and made two groups of 5. We loosely grouped/stacked the strips and then twisted them together. The twisted dough was loosely shaped into a wreath-like shape with only minimal efforts to tuck/blend the edges.
All of the dough shaping was on Non-Stick foil on a sheet pan that was also used for baking it. The directions on the can said to bake 18-22 minutes at 375. We were using two cans at once so we tried 22 minutes and then pulled it out and poked at it a few minutes before deciding to toss it back in for 8 minutes longer at 350. It came out PERFECT.
We used the frosting that came in the cans of dough, and frosted them with a flexible silicone spatula while they were fresh and hot, working quickly and covering the entire ‘cake’ with frosting before sprinkling the colored sugar on top before the icing cooled/set.
Want more Mardi Gras?
Check out our Mardi Gras decorating HERE!
Check out our Fat Tuesday Monte Cristo HERE!